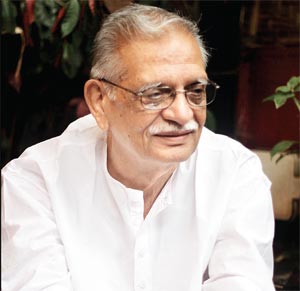 Being an alchemist of verse, his introduction is always as a poet-lyricist. But what about the poetry in his dialogues? Gulzar the dialogue-writer has been criminally overshadowed by Gulzar the songwriter. We remember dialogues from Anand (1971) like Babumoshai, zindagi aur maut uparwale ke haath mein hai… but sometimes forget that they were written by none other than Gulzar.

He first used this line in the film to make his audiences laugh and later to make them weep. We are about to mourn the death of the lively Anand, when the recorder plays these lines, highlighting the transient nature of life.

Unlike Salim-Javed’s style where the focus was more on creating high-voltage drama and punchlines, Gulzar’s dialogues seem simple on the surface but are profound and reflective, even poetic.

Like the conversation between the estranged couple Sanjeev Kumar and Suchitra Sen inAandhi (1975):

Simple lines that convey the pain of separation without melodrama. Few writers could match Gulzar’s mastery in writing about complex relationships with simplicity and finesse.

While it is true that the most oft-repeated Bollywood dialogues from the ’70s belong to Salim-Javed (Sholay, Deewar, Don etc), Gulzar wrote great dialogues in the same era. His fans argue that the Salim-Javed style of dialogue writing was for the masses while Gulzar’s was for the classes.

He worked extensively with Hrishikesh Mukherjee in the ’70s, whose most popular films like Anand, Namak Haraam, Chupke Chupke, Bawarchi or Khoobsurat all have Gulzar’s sparkling dialogues.

Other Mukherjee films like Mili, Golmaal, Jurmana, Bemisaal, Aalap had dialogues by another great writer, Dr Rahi Masoom Raza. In fact, Mili was planned as the female version of Anand, but it could not recreate the magic of Anand’s dialogues.

A famous Urdu critic’s advice to writers was Dus kilo padhiye aur dus gram likhiye. Perhaps it is his vast reading of quality literature that differentiates Gulzar’s superlative work from the current crop of dialogue writers.

10 responses to “Gulzar as the dialogue writer: HT Brunch”